Adrift On The Sea of Menopause 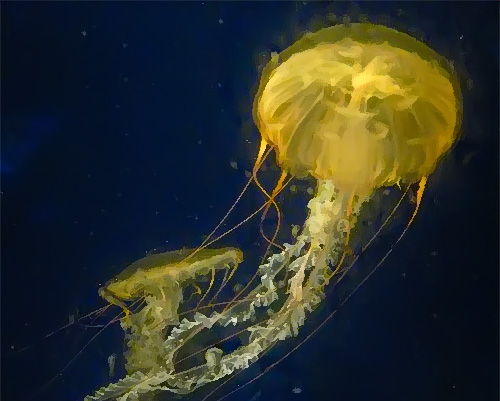 They’re just simple protoplasm
Clear as cellophane.
They ride the winds of fortune,
Life without a brain.”

from the song Mental Floss by Jimmy Buffett

Now that my menopause brain fog has lifted, I notice an interesting new mental phenomenon manifesting itself. It’s a little like what longtime meditators call monkey mind (and I call Menopausal HDD). Still, it’s different. Monkeys jump from tree to tree exuberantly. Monkey mind jumps from thought to thought, idea to idea quickly. There’s almost a manic energy to them.

This new syndrome is more like jellyfish mind. While myriad thoughts intrude themselves, one atop another, I find myself floating among them. I’m drifting in a sea filled with plans, ideas, to-do’s, memories, wishes. Like a jellyfish, I float from thought to thought as they wave and brush against me.

I don’t mind the floating either. Which is weird. Because I like to be focused. Heck, I need to be focused. But too often, I just float from one thought to the next, one thing to the next, serenely. I feel like a caricature of a Zen master (mistress?).

And since it is time for another blog entry and I am surrounded by flotsam and jetsam in my own little ocean, I’m going to write about the various kelp-thoughts that brush against me. The warning here is that these topics may not go together at all. Yet they have at least The Big M in common. Okay, there’s the disclaimer – don’t say I didn’t warn you.

Estrogen Addiction Say What?
Yep, Apparently our hot flashes are due to an estrogen addiction. UBC Professor of Endocrinology Dr. Jerilynn C. Prior presented her findings on estrogen addiction and its treatment with progesterone at Women’s Health Congress 2010 in Washington DC. Not a joke. Really.

According to Dr. Prior, when a woman has a hot flash:

“she’s experiencing a massive release of brain chemicals … Integrating what we know about hot flushes has led to the hypothesis that the brain exposed to prolonged high estrogen levels reacts like the brain of an addict without a fix when estrogen levels drop. The best animal model of hot flushes is the heroin-addicted mouse.”

Apparently, the treatment for this estrogen addiction is progesterone, since “estrogen and progesterone work together in every tissue of a woman’s body.”

Okay. I’ll bite. Massive release of brain chemicals sounds right on. Furthermore, I’m a big believer in natural progesterone cream. But as I’m floating in my little sea, these thoughts brush against me. Do we have to name everything so that it sounds like a disease or disorder? When Mom Nature cold turkeys us at Menopause, does she know what she has done? And is progesterone now our methadone?

Dr. Prior and her team suggest that women who have taken estrogen will have tons more hot flashes when they stop the hormones. Does that mean instead of 20-30 per day, I’ll have 40-50? I gotta tell you, it doesn’t make me excited about stopping my bioidentical patch anytime soon. And I am definitely planning to decrease and ultimately discontinue it, having passed that magical three year mark. Will I need truckloads of progesterone to combat the dreaded withdrawal from my estrogen addiction? Do I need a 12 step program?

There were a bunch of other kelp thoughts I was going to share, but I’ve drifted too far past them and run out of room. They’ll likely show up in the next post.

As Jimmy Buffett continues in his song,

“In one ear and out the other.
Don’t you get criss crossed.
I recommend you try a little
Mental floss.”