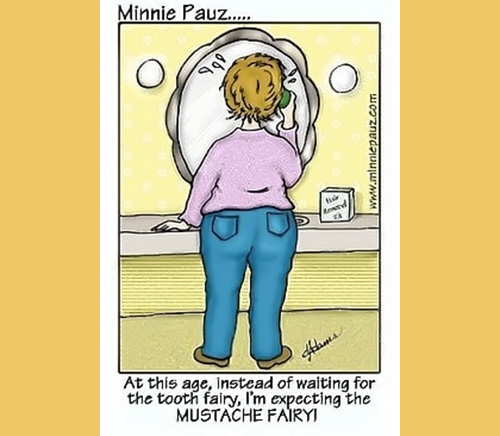 Dee Adams is one of the very first Menopause health activists. 16 years ago she created Minnie Pauz, a cartoon character who spoke for hot flashers everywhere.

Her website continues to save women’s sanity and help them through the transition of the Big M with humor and real information. The Venuses only wish they’d found her sooner! (Or maybe not – we might not have been so motivated to create our own group of goddesses.) Luckily, we’ve found her now.

Dee recounted the beginning of Minnie in our recent phone conversation. She was recovering from a traumatic divorce, but making it on her own, when she broke her ankle. During her convalescence, she was laid off from her job. 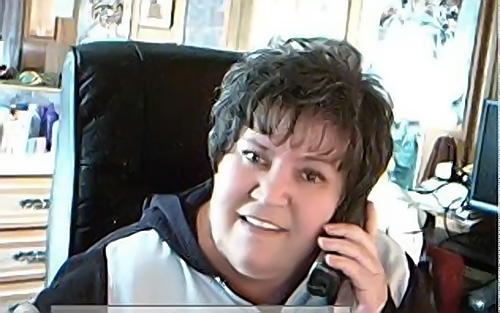 Unemployed, in a dinky duplex, depressed and on public assistance, Dee thought it couldn’t get any worse. And menopause struck.

The Missouri Rehab Work Center intervened by getting her a computer so she could work from home, while her ankle healed. Things were looking up a bit. However, menopause remained a challenge (like it does.)

Then inspiration dawned. One day, an idea of a menopausal cartoon character just popped into her head full blown complete with name and spelling:  Minnie Pauz. Dee had never drawn a cartoon in her life!

But she was filled with thoughts and feelings about all the changes the Big M visits upon us. She reasoned, rightly, that she couldn’t be the only woman blindsided by this forced journey. Her natural humor helped her cope and she was moved to offer her laughter and learnings to similarly afflicted women.

Minnie has gained a following by illuminating the joys and sorrows of Menopause. She verbalizes the thoughts we all have as we Change.

Minnie Pauz devotees may notice that we always see Minnie from the back. Dee shares that she doesn’t like how she draws faces. She still doesn’t know what Minnie looks like, but the consequence of never seeing her face makes her everywoman. As Dee says, she’s sort of like Wilson on the TV show Home Improvement – the next door neighbor whose face is never revealed.

What advice does she have for women going through the most world shattering transition since puberty? “You have to look at everything. What works for one woman won’t work for another.”

Dee is expanding her website even as we speak. Having survived and thrived during menopause (while helping so many of us through it), she is now examining Life after Menopause. She calls her new venture “Afterpause” and it appears on the bottom of her home page as a door, which she says will be gradually opening. Watch for it! Because we’re not done yet!

Sign up for your free at minniepauz.com to get your laughs direct to your mail inbox. Better yet, order Dee’s book, Laugh Your Way Through Menopause for a bigger dose of Minnie’s midlife musings. And you can become a Fan of Minnie on Facebook, too.