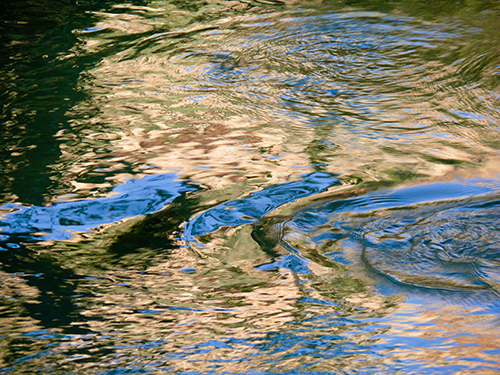 Theresa Venus sent me this horrifically funny clip about a woman of a certain maturity. Yes, I said horrifically. Because this video describes too much of this Menopause Goddess’s life. Maybe yours too?

I wrote about this phenomenon back in 2007 claiming that HDD (Hormonal Deficit Disorder) leads to Menopausal ADD (Attention Deficit Disorder). While I can honestly say that the severity of the ADD has eased, I still have days that are reminiscent of being caught in eddies on a river. You know eddies. Those parts of the river, usually behind some obstruction near the bank, where the water swirls around in a circle actually heading upstream of the normal flow. Every good river boater knows that you can lose a lot of time and momentum in eddies.

One thing I have learned in my five plus decades as a woman and a river runner: don’t fight the current. Work with it, harness its power, use it to your advantage, and try to achieve some degree of harmony with the flow. Struggle never works. It will exhaust you and you won’t achieve the desired result anyway. We are not in control. And maybe that’s a good thing.

So on those days when my attention gets caught in multiple eddies, I just become part of the flow. And try not to leave anything burning on the stove.