Do Your Clothes Reflect Who You Are? 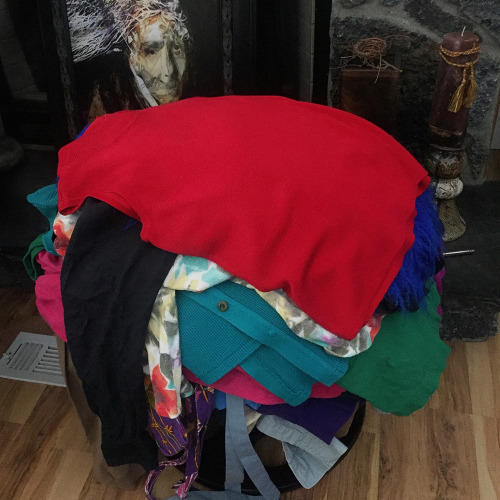 In my closet are a number of outdated outfits that I don’t wear, that take up space, that I’m saving “in case”. In case of what? That I might go back to speaking to businesses sometime? That the beloved relative who shares not one iota of my taste bought and I might wear just for him/her one day? That I might lose the 10 (okay 15) extra pounds and squeeze back into it even though I have no place to wear it? Every day I look in my closet, hoping for the intestinal fortitude to  get rid of all the clothes that are not reflecting “me” right now.

One of my favorite iPhone artists, Meri Walker, posted a fabulous piece on Facebook and the Joy of iPhoneography website. It was like she was talking right to me. She has given me permission to post it here as a guest post. The photo is hers as well.

Read it – you won’t be sorry. I swear this week, my closet will be purged of clothes that don’t suit that woman I am today.

“I Get That Some of You Just Don’t Get Me” She Said. © 2016, Meri Aaron Walker, iPhoneArtGirl, Talent, OR. All rights reserved.)

In response to my report yesterday on Facebook that my latest “creative action” has been a deep exploration of my clothes closets, a talented mobile artist, Kate Zari Roberts, wrote that every time she opens her closet, she wonders who bought those clothes.

I replied to Kate that I’ve been doing that for years! Like five years. Until last week.

Since moving to Talent, I have been wearing a very few things, mostly clothes I folded up and stacked on the trunk at the foot of my bed or hung on hangers in the door to the bathroom that I’ve been using as an art materials and medical supply storeroom instead of a master bathroom. Quirky wierd, I know. And it’s been my best effort to date. It was way too confusing after I bought a house in a tiny town where none of my big-city clothes made sense anymore. And besides, I started calling myself up on my iPhone all the time, making some crazy new kind of art. I could do that in jeans or my bathrobe. And I have been.

But something flipped in me last week. As I watched President Obama embrace Hillary Clinton on the stage at the DNC, and then heard her make a straight-up acceptance speech as the Presidential nominee of the Democratic Party, it felt like a San Andreas fault moved deep in me. And it moved a lot.

Not because I’ve been a long-time Hillary fan. In fact, quite the contrary. I have had sincere respect for her as a PUBLIC public servant who has remained focused on improving the welfare of women and children for over three decades. I have been inspired by her persistence and resilience in the face of relentless attacks by the Congress and the press and conservative political activist groups while she proposed new ways of doing things that had stopped working. I haven’t agreed with everything Hillary has done any more than I’ve agreed with everything any politician has done, including our current President, who I can’t help but love and honor at the same time that I’ve watched him take some executive actions that I believe are harmful.

But, something deep flipped when I heard Hillary say with simplicity and grace, “I get that some of you just don’t get me,” and then go on to make the case for her desire and competence to be President of the United States. That line, and the tone of voice with which she made the reset of her remarks, allowed me to welcome – in myself – who I have become as a woman while I’ve been treated like a third of a person for 66 years.

The immersion in my own creative process with my mobile devices for the last five years has reorganized my psyche. It hasn’t changed who I am but it has allowed me lightning fast access to capture, shape and share my personal, creative responses to my actual life experiences anytime and anywhere with a lot of people. Powerful, portable, affordable mobile tools – and the ease with which I can freely express my thoughts and feelings – have reprogrammed my “freelance shooter” mind to attend, full-time, to my own experience. After a lifetime of working “for the man,” these days I focus my attention on telling my own stories – with images and a few words – instead of hunting for evidence for others’ stories.

On this trip with my phone – from tiny Talent – whatever I was wearing has been fine as long as it had pockets and allowed me to move freely. This cut out almost all the big-city clothes I brought with me from Texas after a lifetime as a “stay-at-home Mom,” “working professional woman,” “female community activist,” “tango and ecstatic dancer,” “mid-life jock,” “nature lover,” “culture diva,” “sexually liberated feminist,” “printmaker,” and on and on.

What I had accumulated in my closets were either trophies or fresh, unworn armor – “fabric guns” – that had protected my tender woman’s heart against the blazing, unconscious, systemic misogyny that I have stepped into every time I left home to do something that mattered to me. I collected clothes the way men collect guns – to help me get what I needed for myself and my children and to keep the predators at bay – because I’m not a subservient woman.

And I’m far from the only American woman who has lived – or still lives – this way. There are all kinds of women in the world, not just cookie-bakers.

When Hillary simply acknowledged with grace and humor that some men – and women, too – “just don’t get her” because she’s wants to play big in the world, she shifted my understanding of how to hold the resistance I’ve felt about being an American woman for 66 years.

I realize that’s a funny thing for an American woman to say who’s had a big education, a big career and been a life-long feminist activist. And it’s simply true.

In the days since I watched Hillary speak, I found myself opening the closets, pulling out everything, and physically re-experiencing what each of my different fabric guns has done for me. Living in the “land of the free and the home of the brave,” when you’re a woman, you’re always, always, always in danger – and more so if you’re a woman who resists being treated like a third of a person. I started sewing my own clothes when I was seven and I have loved creating and collecting clothing that would help me take care of myself as a woman. I put the sewing machine away when I went back to graduate school. But it’s out now on the kitchen table where I’m looking forward to redesigning some pieces I love that still have happy-potential.

At this point, there are piles everywhere like the one in the picture above. They’re going to consignment shops and battered women’s shelters because I don’t need them and there are plenty of women who do.

I’ve been laughing my head off, putting what I am keeping together in brand-new ways to cover my now aging, sagging flesh in fun ways. I’ve been shrieking aloud when I come up with a new outfit from old pieces, delighted that I have had all the experiences I’ve had, and that I no longer need to keep clothes as trophies of battles won – or lost – or armaments I’m stockpiling to defend me in years to come.

The jig is up: we’re women. And there are a lot of people who just don’t get us. Dressing for success – so we look good enough to eat (attack) – is just too much goddamn trouble. And it cuts out the fun of being a woman who loves clothing because it’s beautiful.

Regardless of whether or not I agree with her every time, Hillary Clinton has made herself a model of strength as an American woman: a woman satisfied to continue her quest to build a safer and healthier world for women and children – even when so many “just don’t get her.”

Well, me too – I’m with her. Wrinkles and saggy arms and asses and all.